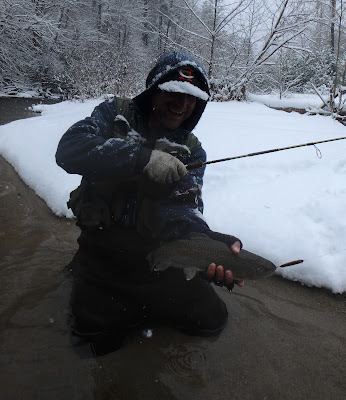 Having a bit of time available and a computer on my lap, I'd like to update this blog with a fresh fish story. Sadly, though, there's nothing to tell. Between some work practicalities, full recent weekends and a lot of unfavorable weather, I simply haven't fished much lately. The few trips I've taken have been mostly to shoot lure photos, with a few casts made along the way. I've caught a few fish, but nothing really worth writing about.

Photo, which was taken by Tim Mead, was from a super fun day last winter on Wilson Creek in Western North Carolina. Not many fishing days look like that one in this part of the world. A few photos from that trip just caught my eye when I was looking at files on my computer.

I suppose it's because there's nothing to tell that this blog doesn't really say anything. Let's hope the next one will be necessitated by a good fish story that needs telling!
Posted by Jeff Samsel at 5:08 PM 3 comments: 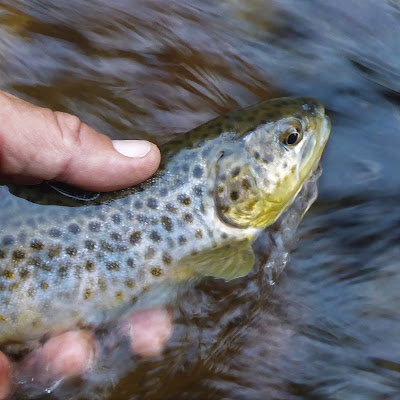 My phone tells me it's 21 degrees outside my house, and yesterday's rain knocked off many of our late-clinging leaves. Seemingly, autumn has fled North Georgia, and days that have that wonderful autumn-like feel and appearance won't return for another 11 months or so. 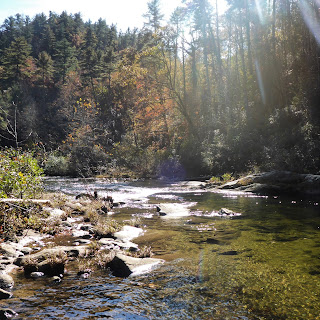 I'm glad to say that on Monday (the day before the rain arrived) it fit well with work needs for me to slip out to one of my favorite Georgia streams to do a bit of fishing and lure photography. I didn't venture far from the care or hit the fishing super hard. Various lure pics were my main priority. Even so, the trout were cooperative enough that I was able to catch and release several pretty little brown trout. Rebel Teeny Wee-Craws and Tracdown Ghost Minnows earned all the day's catch credits.

The stream was low and clear, and the steep slopes that bound it sported the rusty colors that define late autumn. Making a good thing even better, I had the stream to myself, despite fishing very close to an easy access point.

Posted by Jeff Samsel at 7:22 AM No comments: 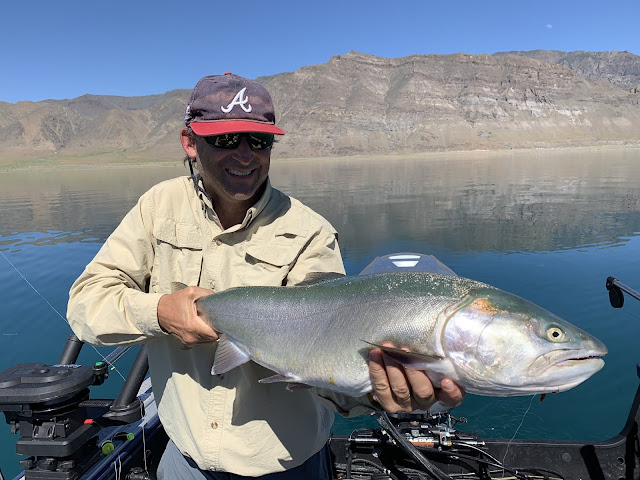 Blogger note: I wrote this in a plane on the way home from Nevada in June, and connection problems kept it from posting. Then I got distracted from my blog and never got around to trying again. So instead of reworking something, I'm posting what I meant to put up more than four months ago, with an intent of making the next post much sooner!

My most recent post expressed confidence that by week’s end I would add Nevada to the list of states where I’ve caught at least one fish. Make that more than 100 fish, most of which were big cutthroat or rainbow trout.

Before this week I had never fished in Nevada and really hadn’t heard much about its trout fisheries. Having spent time on three lakes and having learned about several other rivers and lakes, I’m convinced Nevada has some of the most overlooked trout fishing in the nation. The trophy cutthroat fishery at Pyramid Lake is truly world-class, and both other lakes we fished produced steady action from fat rainbows.

Along with yielding fabulous fishing, all three lakes offered stunning scenery, with surprisingly few other anglers around us.

I fished all week with Denis Isbister, host of Wild Fish, Wild Places, and we caught most of our fish on Tasmanian Devil Lures. Denis has fished these waters all his life, and enjoys opportunities to share favorite places. I’m thrilled that I got to be the recipient of that sharing this week!
Posted by Jeff Samsel at 6:48 AM 1 comment:

This morning, while I was driving to the Atlanta airport to fly to Reno for a week of Nevada trout fishing, it occurred to me that I’ve never caught a fish (or fished, for that matter) in Nevada. Based on reports, that’s nearly certain to change tomorrow, so that got me wondering how many states remain where I’ve never caught a fish. Upon getting settled at the airport, I pulled up a map to survey and identified 11, including Nevada, so once I catch a fish this week, 10 states will remain.
Posted by Jeff Samsel at 10:01 AM 4 comments: 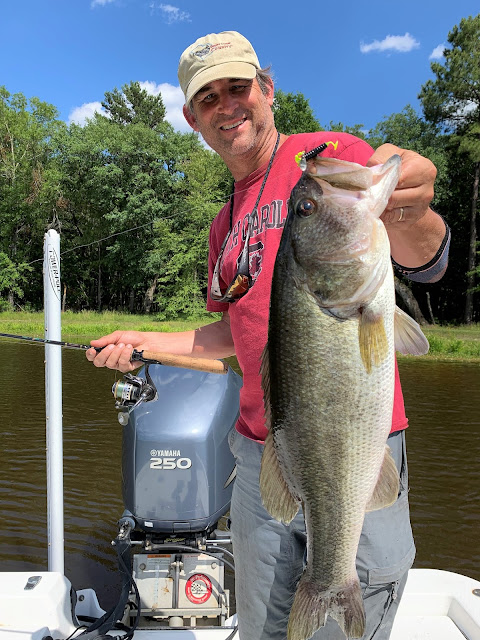 While I was in South Carolina last week, I got a chance to sample the offerings of a new fishing club that is being developed on property that fronts the Edisto River near the town of Ridgeville. Kevin Davis of Black Camp on the Santee Cooper Lakes thought a trip the Pine Bluff Sportsmen's Club property would yield good photo opportunities, and he was most certainly correct. Limited time only allowed us to fish one of the five ponds on the property, but a few hours on a single pond yielded a terrific mixed catch of crappie, bluegills and bass, including the largemouth in the photo above, which provided quite a surprise and a test to my ultralight gear when it attacked a 1/16-ounce Road Runner.

The club and the complete management plan are still being developed, but the ponds, which are restored sand mining pits, have been maturing over the years and already provide outstanding fishing opportunities. No doubt I'm hopeful to get back out there to spend time sampling more spots!
Posted by Jeff Samsel at 10:44 PM 1 comment: 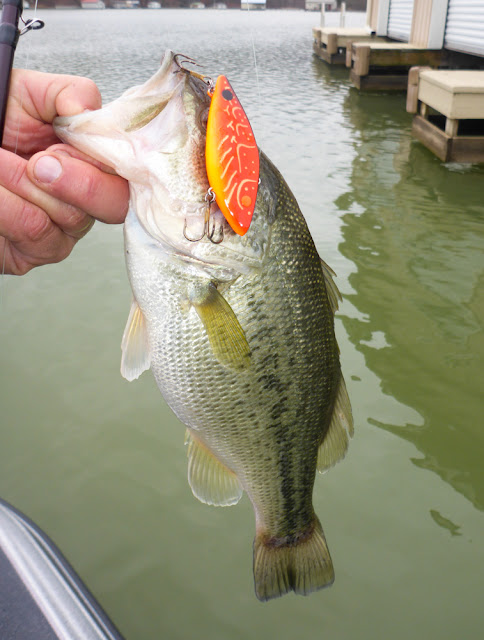 My fishing year is off to a very spotty start in a couple of different ways.

First, I simply haven't fished that much. I've made trips to Florida, South Carolina and Alabama to fish a bit and gather content, but for a couple of different reasons, two of those got cut short and only amounted to one day on the water. I haven't done much local fishing on days between trips, so to say my fishing time has been spotty, when compared to a normal year, would be an understatement. Plans, as of now, are to fish all next week and plans are brewing for several other angling adventures, so by theory, that is about to change.

Second, you could say my early efforts have been "spotty" because all the bass I've caught this year have been on a Cotton Cordell Super Spot. A handful of saltwater fish fell to different offerings while I was in Florida, but all of my bass have been on a Spot.  That's not too surprising, I suppose. A Spot is a fabulous early-season bass lure and one I throw quite a bit during late winter and early spring. That said, assuming next week's fishing plans remain in tact, I'm going to try to add a little variety!
Posted by Jeff Samsel at 7:37 AM 2 comments: 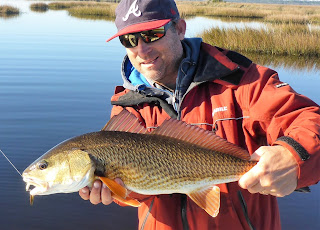 I'm not sure which is worse: that I didn't catch my first fish of 2019 until the about the third week of January or that it took a two more weeks to finally mention it in a blog post. Both are true, so I suppose it doesn't matter.

Fish No. 1 for me this year was the redfish pictured above, caught on a Bozka Salt Runner from Florida's Nassau River while I was fishing with Chris Holleman. It was in a high marsh area along the edge of the main river that you have to get into (and back out of) while the tide is pretty high or you'll be there till the next high tide! We managed to catch a couple of reds from that area and got out while we could. The same trip, which included time in the boat with Chris and with Nathan Johnson and Tim Mann, produced some more redfish, quite a few speckled trout and a few largemouth bass, although I didn't catch any of the bass, thus leaving my 2019 species list tally at two.

Next on the agenda is Santee Cooper, followed by Lake Guntersville, so it would seem I should start to get some freshwater species on this year's list. I would say, "reports to follow," but based on my recent blogging history and how it has compared to my intentions, I probably shouldn't state that as a fact quite yet.
Posted by Jeff Samsel at 7:38 AM 2 comments: